Enjoy reading this guest blog by Andrew Scheyer and Shuhan He from Maze Engineers. It shows you all the technical ins and outs of the Radial Arm Maze, a maze that is used to measure two forms of memory known as 'reference memory' and 'working memory' often in combination with video tracking software EthoVision XT.

What is a radial arm maze?

The radial arm maze is an apparatus consisting of a circular center compartment from which 8 equally spaced «arms» extend. Each arm is an elongated column of equal distance, the far end of which may contain a reward (most often food-based) not visible from the center compartment.

How does a radial arm maze work?

Rodents (mice or rats) are placed in the center compartment and allowed to explore the arms in search of this reward. Throughout an experiment, the animal must remember which arms have been visited in order to ensure that they do not repeatedly enter arms which do not contain a food reward.

The design of the maze ensures that the animal must return to the center between each arm visit and is therefore presented with the same 8 options each time, following which they must remember which choices have already been made. In this way, the radial arm maze measures two forms of memory known as “reference memory” and “working memory.” 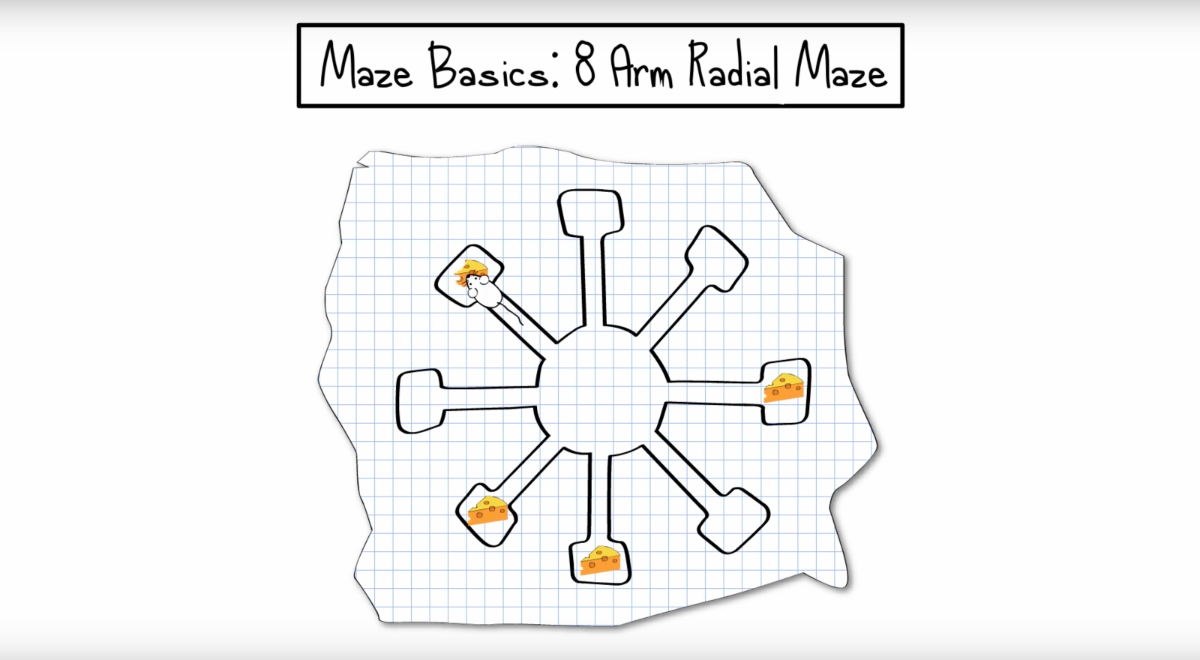 History and usage of the radial arm maze

The radial arm maze was first designed by Drs David S Olton and Robert J Samuelson in 1976 [1] as an apparatus for testing reference and working memory in rodents and for the modeling of “serial learning”, the term used to describe the means by which we learn and recall lists and other forms of sequential information.

Reference memory describes the ability to recall information associated with the “what” and “where” of spatial tasks. Thus, in the radial arm maze, reference memory is used by the subject to remember what they found in each of the arms (either an empty end-point or a reward).

A wide variety of memory tests with the radial arm maze

The radial arm maze has been used extensively for memory testing in a variety of conditions including the effects of psychoactive drugs and medications, as well as disease states such as autism spectrum disorder [2] and brain injury [3]. It has also been used to characterize basic functions of the brain’s various centers of memory function and individual differences in cognition between animals.

Request a free trial and find out what EthoVision XT can do for your research!

Interestingly, researchers have noted significant differences in performance in the radial arm maze between different strains of mouse, specifically regarding which areas of the brain are used in completing the task. For instance, when comparing the inbred strains C57 and DBA, researchers discovered that dependence on either the hippocampus, amygdala or frontal cortex are differentially important between the strains [4].

Testing specific areas of the brain

C57 mice are considered to be ‘‘high-learner’’ mice who often perform better on a variety of memory-associated tasks. A lesion to the commonly known location of memory function, the hippocampus [5], causes significant deficits in performance in either the C57 strain or the DBA strain of mouse. However, lesions to the amygdala and frontal cortex caused deleterious effects on performance only in the C57 strain, indicating that perhaps the enhanced learning seen in these mice is due to participation from these brain regions in addition to the normally recruited hippocampal activity.

The radial arm maze has also been used to investigate behavioral deficits in a plethora of animal models of cognitive dysfunction known to impact memory, such as anxiety and depression.

For instance, using a rat model of depression known as congenital helplessness (cLH), researchers have shown that rats with depression-like symptomatology perform poorly in this task [6]. Using a short delay between trials in the radial arm maze, they found that cLH rats made significantly more errors in remembering which arms of the maze had been previously visited and where they could find the food reward. This finding suggests that, like in humans, states of anxiety which accompany depression interfere with memory functions and inhibit decision making.

Because the radial arm maze has been valid as a model of cognitive deficits in mental disorders, such as in the above-described experiment, it follows that the maze can also be used to test pharmacological treatments to ameliorate these symptoms.

Recently, a great deal of interest has been paid to pharmacotherapeutic interventions that target GABA-A receptors, which themselves have been historically shown to participate in a range of memory functions [7]. Indeed, GABA-A receptor dysfunction is prevalent in major depressive disorder [8] and schizophrenia [9] disorders which are accompanied by significant memory dysfunction.

First, using a rat model of schizophrenic symptoms induced by administration of either scopolamine or the NMDA-antagonist MK-801, researchers found that the novel drug ONO-8590580 was able to reverse the memory dysfunction associated with this disorder [10]. Mice which were treated with scopolamine or MK-801 showed the expected deficits in performance in the radial arm maze, confirming the validity of the model for inducing cognitive deficits.

However, when given ONO-8590580, the mice were able to successfully complete the task with similar efficacy as mice who were never given the drugs to induce schizophrenic-like symptoms and memory deficits. In this way, the researchers were able to use the radial arm maze to confirm the disorder as well as to exhibit the functionality of this novel treatment.

Improve performance in the radial arm maze in multiple conditions

In two similar sets of experiments, this time intended to model memory dysfunction associated with neurodegenerative cognitive decline, researchers have shown that other inhibitors of GABA-A receptor function can improve performance in the radial arm maze in multiple conditions. Using a scopolamine-induced model of neurodegeneration, researchers in 2017 tested another novel GABA-A receptor inhibitor known as S44819 [11]. After inducing the neurodegenerative state in mice, they treated the animals with this compound and found that it reversed the scopolamine-induced deficits in the radial arm maze.

This same drug was also tested in a ketamine-induced model of dementia-like memory dysfunction in mice. As with the above experiment, researchers showed that while ketamine treatment caused poor performance in the radial arm maze, indicative of significant memory dysfunction, a subsequent treatment with S44819 ameliorated these symptoms [12].

Thus, the radial arm maze provides an excellent model of working memory which can be used to test treatment strategies for targeting multiple disorders and diseases.

This e-book serves as a stepping stone for your behavioral research, providing background information and references.

Having been in use for more than 40 years, the radial arm maze is a robust and well-characterized apparatus for the analysis of spatial memory, working memory and reference memory. Its applications range from basic characterization of memory functions in various rodent models, to the identification and treatment of disordered cognition in disease states.

Finally, the clever design of the maze means that animals do not require pre-training and permits a wide variety of modifications, from holding periods to test the duration of working memory to the reduction [13] or expansion [14] of the number of arms in order to increase the complexity of the task.

Screening insecticides for efficacy or tolerance

Maarten Jongsma and colleagues use EntoLab to detect changes in insect behavior that provide a sensitive method for identifying and quantifying resistance development. They tested this approach with pyrethrins against aphids.

Prof. Dr. Berry M. Spruijt recently retired from his position at Utrecht University. I had the honor of attending the symposium that was organized to reflect on and celebrate his career.

Walking in circles - the exploratory activity of Drosophila

Like rats and mice, fruit flies avoid open spaces and stay close to physical borders. In rats and mice this is caused by fear to be out in the open and preference for close contact with borders.