Almost everyone reading this will know someone who has Alzheimer's Disease, or a similar form of dementia. Six millions Americans (1) and 10 million Europeans (2) are suffering from the disease. Many countries have an aging population, so if no progress is made in prevention and treatment, it will only get worse.

That means that there has been a huge volume of research done in the last decades in this area, both with human subjects and with animal models of the disease. It is hard to investigate in humans, not only because sometimes invasive techniques are unavoidable, but simply due to the timescale. To understand how the disease works and how to treat it, it is necessary to see what is going on in its early stages. With people, that can be many years before those who have it become aware of its symptoms. However, animals like mice only live a few years, so they can go from adult to elderly within the time of one experiment.

In this blog, we explore how a new type of test enables scientists to research the onset of Alzheimer's disease at an early stage.

Although there is still no good medicine available to treat it, we now know that a healthy diet and regular exercise are really important in holding off the symptoms. We also understand a lot about its causes, especially that a build-up of protein plaques seem to be important, although the jury still seems to be out on how much that is cause, and how much affect.

Some people in their 60s develop mild cognitive impairment (MCI). MCI is characterized by forgetfulness and problems with cognition. Some people with MCI then go on to develop Alzheimer's (or other forms of dementia) when those problems get severe enough so that they interfere with their daily life. They also develop other symptoms like getting lost and other behavioral changes.

The eye is considered by some anatomists to be part of the brain and one of the lesser-known effects of Alzheimer's is that it can also affect the eye's retina, also in the earlier MCI stage. Protein plaques can build up, and the nerves can degenerate (3). 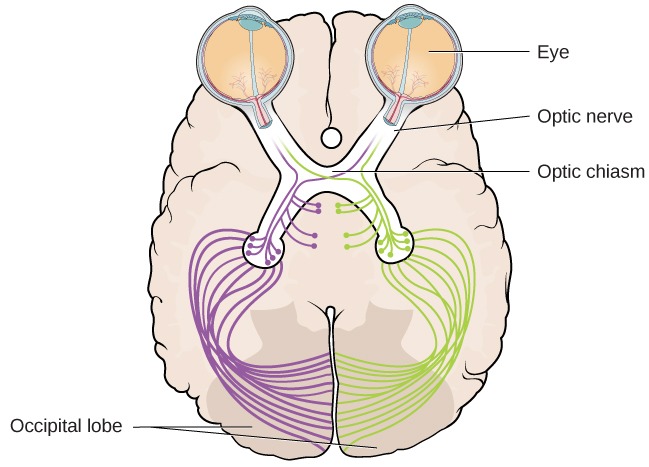 Alzheimer's patients can experience significantly impaired color and also contrast sensitivity. This gives a visual impairment which is rather like tritan color-blindness (tritanomaly). This is quite a rare form of color-blindness. People with that condition have less sensitivity in their blue cone cells. The human eye has three types of cone cell to detect color; red, blue, and green. Someone with trital color-blindness might have difficulty distinguishing red from purple, because blue is the difference between red and purple. Cataracts and glaucoma can have a similar effect, but that is due to filtering the blue out of the light. Blue color discrimination impairment has also been reported for other diseases including multiple sclerosis, Parkinson’s disease, Huntington’s disease, and Gilles de la Tourette syndrome, so its relevance is wider than just Alzheimer’s.

Although humans and other primates have red, blue, and green cone cells, many other mammals, including mice, have just two types; blue to near ultra-violet and green. That means that they will see colors a little bit like the 4% of humans with red-green color-blindness, but (like many insects) can see more differences at the blue end of the spectrum and a little beyond (4). Mice have relatively few cones, leaving more space for the more light-sensitive but monochrome (black and white) rod cells, enabling them to see well in low light. Objects seen in moonlight look monochrome to us because we are viewing them with our light-sensitive red cells. 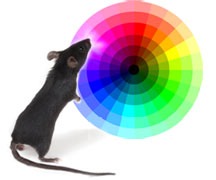 The conclusion is that although the color vision of mice is different from people, they can detect subtle differences in color and brightness. The eyes of older mice are less sensitive to contrast. The question is, do mice from a genetic strain which gives them Alzheimer's symptoms ('AD mice')  also show the sort of degeneration in color vision that people get in the early stages of Alzheimer's?

In order to determine that, Vit and colleagues developed a new type of maze (4, 5). It has 4 arms in an x-shape, which have black walls and semi-transparent white floors. The floors can be lit up with LEDs underneath with red, green, blue, and white light with variable brightness. As the mice cannot see red, this can be regarded as a control arm, which looks dark to the mice. Although mice can see near UV, this was not used due to safety consideration for the human researchers. The maze is called ViS4M (Visual-Stimuli 4-arm Maze). The position and movements of the mice can be tracked and analyzed using EthoVision software. You can see the maze in operation in this video:

The interpretation of data obtained with the maze relies on the fact that, as a prey species, mice naturally avoid brightly-lit areas. The mice also tend to explore the four arms is a specific sequence, before returning to the arm that they started in. AD mice show a dramatic decrease in activity, speed of movement, and how often they move between the different arms (percentage of alternation). They showed this at 8.5 months age, whereas memory problems could not be detected (with the Barnes maze) until the mice were 13-months old.

They prefer the red arm, which looks dark to them. 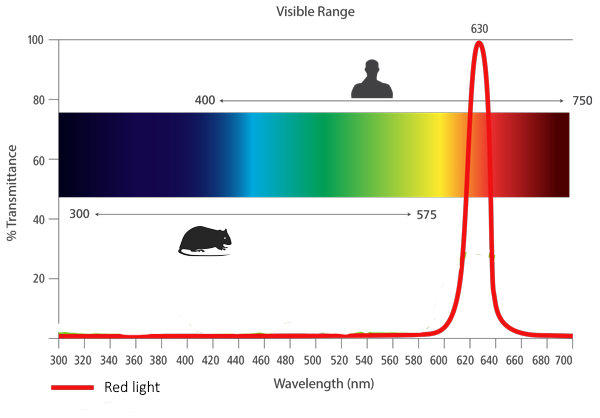 The conclusions are that the ViS4M 4-arm color maze is a sensitive tool to assess color discrimination and contrast sensitivity in mice. Color vision guides spontaneous behavior. AD-specific impairments can be picked up with the maze months earlier than traditional cognitive tests.

Do you want to use this test?

Part of this blog is based on the protocol published in reference 5. We are grateful to J. Vit and colleagues for permission to use their video in this blog. The mouse color wheel illustration is from https://www.colormatters.com/color-and-vision/color-vision-for-mice and the eye/brain anatomy illustration is from the open text Psychology textbook from OpenStaxCollege.
The figure showing mouse/human color vision in relation to red light was modified from a figure from https://kenall.com/Animal-Research-Lab-Lighting.

During the annual Brain Awareness Week, international attention focuses on the brain to increase public awareness of the progress and benefits of brain research.

10 behavioral studies on Alzheimer’s and Parkinson’s

This blog post features 10 interesting studies that use innovative techniques to study models of AD and PD and important underlying neuronal mechanisms.

Part 2: How researchers use the Morris water maze to find treatments for AD

In this second part of a two-part mini series, we highlight two more studies on potential Alzheimer’s disease treatments that are investigated using a Morris water maze.