Scientists at the University of Salento in southern Italy have published [1] an interesting study on the ecology of  tiny aquatic shrimps called Gammarus insensibilis. In order to carry out the study they had to overcome some challenging technical hurdles, but in the end they succeeded, and it produced fascinating results.

Finding enough food whilst not wasting too much energy looking for it, is a key problem that all animals have to solve. There is a strong evolutionary pressure to be good at that. If you can forage more efficiently than your neighbor, you will have more time and energy left over for other activities, and so you will have a higher evolutionary fitness.

That means that many studies have found that foraging strategies of animal species are often mathematically close to optimal. However, what is optimal is very different for different types of animals. Size, metabolism, and position in the food chain (predator/prey) are among the important factors. Aquatic ecosystems often work just a bit differently than terrestrial ones [2], and we know less about them because they are harder to study.

So studying the foraging of a typical species like Gammarus insensibilis has the potential to give insights not only in that one species, but more generic insights into the way that those ecosystems work.

No matter where you live, if you find a clean stream and rummage around in the bottom of it with a net, you will probably come up with some freshwater shrimps. Often they will belong to the genus Gammarus. There are over 200 different species of Gammarus in the world and they are found in salt and brackish water (partly salty, e.g. in an estuary) as well as in freshwater.

The species used in this study, Gammarus insensibilis, is called in English the Lagoon Sand Shrimp, and indeed it lives in brackish water in coastal lagoons. It is found along southern European coasts of the Mediterranean, the Black Sea, and also on the coast of the English Channel. It can be found living up to 15 meters deep and lives off rotting vegetation and algae. Gammarus is a crustacean, like crabs and woodlice; although it is an invertebrate, it is not an insect (count the legs!). 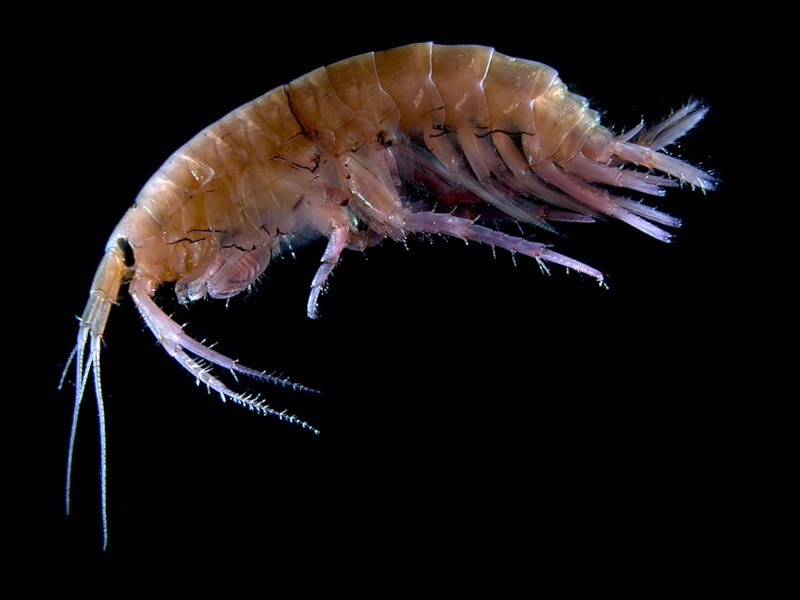 Gammarus insensibilis is really difficult to track by video. It hides away from sunlight, so normal illumination doesn't work. It is semi-transparent, so the camera has great difficulty distinguishing it from the background. They can be as small as 5 mm long (so it is much thinner than 5 mm). To make matters worse, as it moves, it likes to stick close to the walls of the maze. That means that if the camera isn't directly overhead, then it cannot see it.

Aquatic invertebrates can be tracked with DanioVision, but not for this sort of experiment. In order to be able to measure the foraging behavior of Gammarus, the maze needs to be quite large, with a number of chambers with food in, connected by channels. The recordings also need to be long, six hours, to give the shrimps time to move around enough in the maze.

Small terrestrial animals that blend in with their background are sometimes tracked with the help of colored dots painted onto their bodies using a technique called mark and recapture. Unfortunately that won't work for Gammarus and similar aquatic animals. Scientists have tried to mark them in various ways, and it always ends up damaging them and having an effect on their behaviors, so the results are not reliable.

The solution for this video tracking problem

Video images are composed of pixels and like with every video tracking system, EthoVision XT needs the animal that it is tracking to be at least a few pixels wide. Theoretically, a solution might be to have a really high resolution (that is, with many pixels) video camera placed above the large maze. However, that would mean that the camera was not directly be situated above the chambers and channels at the edge of the maze, and so the animals would be able to hide from it as they swim along hugging the walls.

The solution that Noldus and the researchers at the University of Salento came up with, is to have multiple cameras above the maze and for each of those images to be analyzed as one EthoVision XT arena. 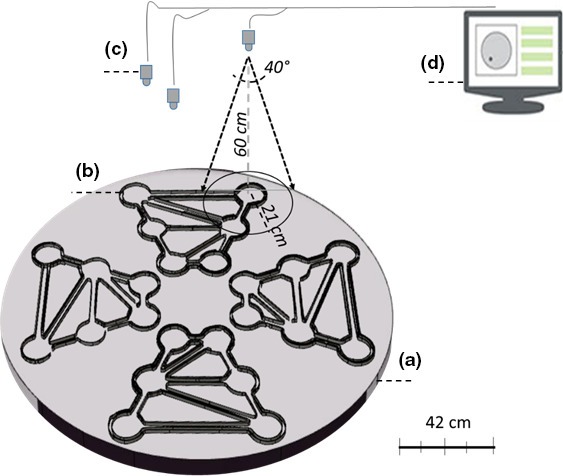 However, that creates a new issue; how to deal with the problem of the animals moving from one camera to another. This was solved by a clever approach to the analysis.

Each channel between the chambers filled with food was divided into three sections, and EthoVision XT recorded when the animals moved from one section to the other, a 'transition'. In that way, the speed and frequency of when an animal left a food chamber and entered a new one, could be quantified. From those transitions all sorts of other statistics could then be worked out.

The problem of the animals reacting to light and their transparency was solved by making a large infra-red lighting unit illuminating the whole maze from underneath and using near infra-red sensitive cameras together with filters blocking out white light.

Find out how EthoVision XT is used in a wide range of studies and how it can elevate your research!

Successful new method to track shrimps and analyze their behaviors

The custom setup with EthoVision XT at its heart worked very well. Only a small number of animals couldn't be tracked because they were too small or too transparent. The new method was a success!

The scientific results were also interesting:

The diagrams from Shokri et al. 2020  are available for reproduction in any medium under the Creative Commons Attribution license. The photograph of Gammarus is from Wikipedia and is of Gammarus locusta.

Although the author of this blog was not involved in the custom setup described here, he did make an earlier visit to install and train EthoVision and other related setups, and he would like to thank the researchers for their welcome and hospitality.

Tracking a wide variety of animals

Video tracking is used to track a widevariety of animal species in even more different test arenas. From insects of 1 mm on leaf discs, to monkeys in a cage, or zebra fish in an aquarium.

A new fish on the block: Japanese medaka in toxicology studies

We are all very familiar with zebrafish as a model species in neuroscience research. Today, let's talk about another fish, the Japanese medaka.

Manually observing chickens in barns is a tedious job to which ultra-wideband tracking offers a solution. But does it interfere with normal behavior?