The Internet of Things, LoRa, 5G, and measuring behavior

When the pioneers of behavioral science, Karl von Frisch, Konrad Lorenz, and Niko Tinbergen did their research which would result in their Nobel Prize in 1973, more or less the only tools they had available to help them was a notebook and pencil. Later, such research was supplemented by video cameras and computer-aided observation (the basis of The Observer XT from Noldus).

In recent years a whole load of new sensors have come onto the market which can measure all sorts of things about the subjects of such research including their position, fine movements, physiology, gaze, muscle movements, brain activity, and levels of chemicals like glucose and hormones. Sensor measurements have three main advantages over pure observations; they are completely objective, they save a lot of time, and they can measure things which you cannot measure just by looking.

Tinbergen describes his work in the book Curious Naturalists (downloadable here), which makes fascinating reading. He spent hundreds of hours making detailed observations in diverse places including the inland dunes on the Veluwe in the Netherlands and in the hostile climate of Greenland. Even today those places are too remote to think of using sensors connected directly to a computer.

Of course there are some workarounds; sensors can write the data to memory cards which can be periodically retrieved and there are even special (but expensive) satellite channels reserved for this sort of data. In theory mobile phone networks could be used for that sort of application, but they are currently too energy-hungry to really work well for long-term sensor data transfer.

The game-changer in this field is the upcoming development of the Internet of Things (IoT). In the IoT, not just computers and phones, but all sorts of other devices can be connected to the internet. Current applications include strain monitors on bridges so that they are continually monitored instead of waiting for the next expensive manual inspection, monitoring the health status of patients recuperating at home, and giving passengers information about how full trains are so they can plan their journeys accordingly.

Future applications currently being worked on will include things like traffic lights informing self-driving cars that they are changing to red and a farmer being automatically notified if one of his or her cows don't have optimal health or welfare. 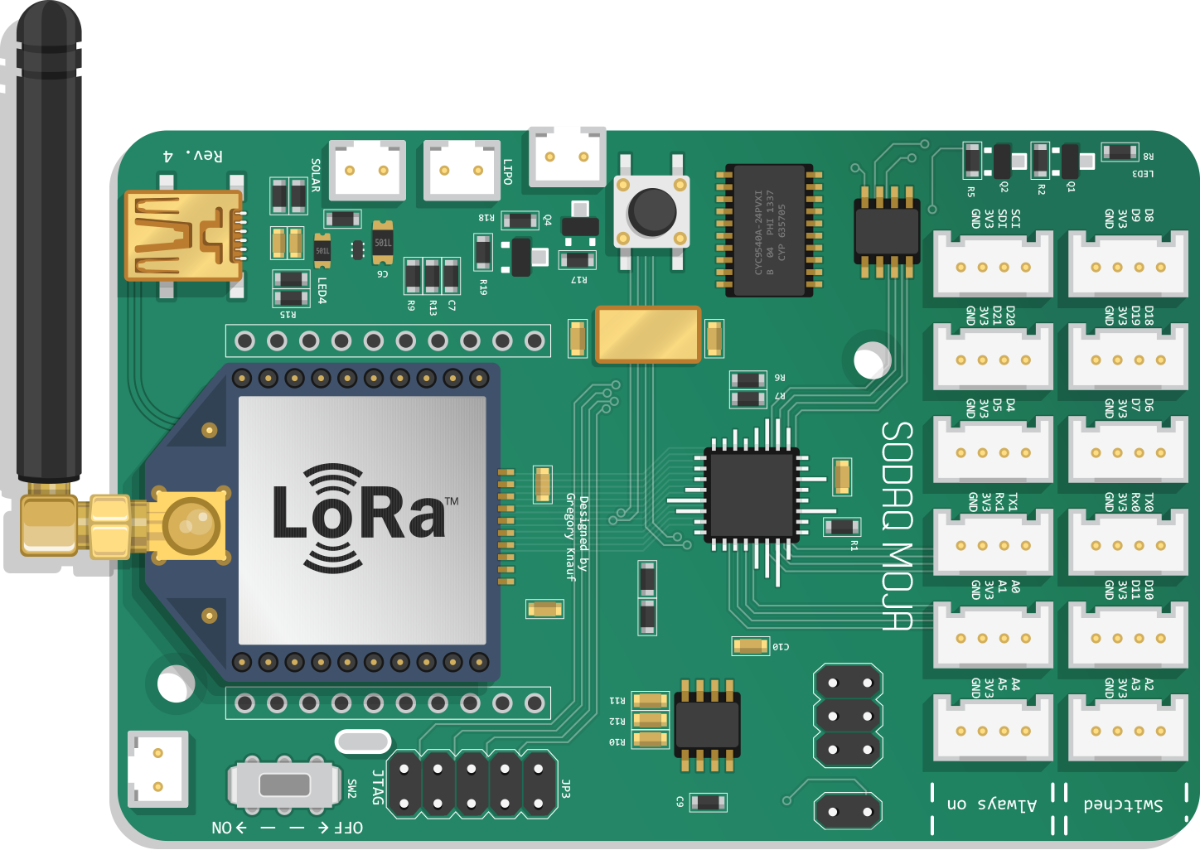 One of the links in the technology chain that is currently being improved, is how to get the information from the sensor to the internet. Many sensors only produce a small amount of data, but they might be a long distance from the nearest computer. Especially for this scenario, the LoRa protocol has been developed.

LoRa is short for Long Range and it is designed to send a small number of bytes of data, at most a few times an hour, up to 10 km. The sensors are typically battery operated, low cost, and designed to last in the field for over ten years. Typical applications are water and gas metering, and smart parking. In some countries LoRa connectivity is available from telecom providers, but it is also not difficult to set up your own LoRa network if you know what you are doing.

Those specifications mean that LoRa can also be suitable for certain types of sensors which are used to measure behavior. For instance, in the GenTORE project, Noldus' engineers have implemented LoRa support into a GPS tracking tag which is designed for larger animals like cows and includes a built-in solar panel to power it for a long time period.

The engineers also implemented a prototype of this solution for a temperature sensor used to monitor the health status of cows in another project, VetBioNet. In that case, the cows were living in a secure veterinary bio contained research facility. If it wasn't for the LoRa connection, the scientists would have to dress in biohazard suits and undergo decontamination (a big time-consuming hassle) just for a simple task like measuring the temperature of the animal. In this case the LoRa antenna could simply be attached to a laptop, making it a very practical solution.

Noldus' work with LoRa has shown it to be very suitable for its intended purpose; long distance transmission of low frequency data. However, some sensors produce a lot of data or it can be very important that none of the data is lost, or real-time communication might be needed.

A typical example of that would be applications related to safety in traffic or remote control of heavy machinery in hazardous environments. For those sorts of uses, 5G is being developed. 5G is mostly known as the network standard which will give much higher speed internet access to mobile phones than the current 4G network. It will use several frequency bands, some of which are new for cell phone communication (30 to 300 GHz).

There is some concern about the new frequencies, but in fact they are already in use for many other applications, including airport security scanners, anti collision radar for cars, and to link present-day cellular base stations. However, in addition to the high speed internet, 5G will include protocols for very robust and fast (low latency) connection to sensors and the internet, which could provide interesting possibilities for the future. But, for the coming few years, LoRa will remain a very attractive solution for transmission of behavioral data acquired with sensors.

VetBioNet is funded by the Horizon 2020 program of the European Union, project number 731014.

The GenTORE project is funded by the Horizon 2020 research program of the European Union under grant number 727213.

Want to learn more?
Download the free guide "How to build an AV-Lab"!

Bank voles are often exposed to predator odor and alarm pheromones. This perceived predation risk may cause cross-generational behavior changes, which seem to be context-dependent on their in utero exposure.

Does it matter how much time a cow spends standing up or lying down? Bert Tolkamp thought that it did matter, and he proved his point by winning an IgNobel prize for his work on this.